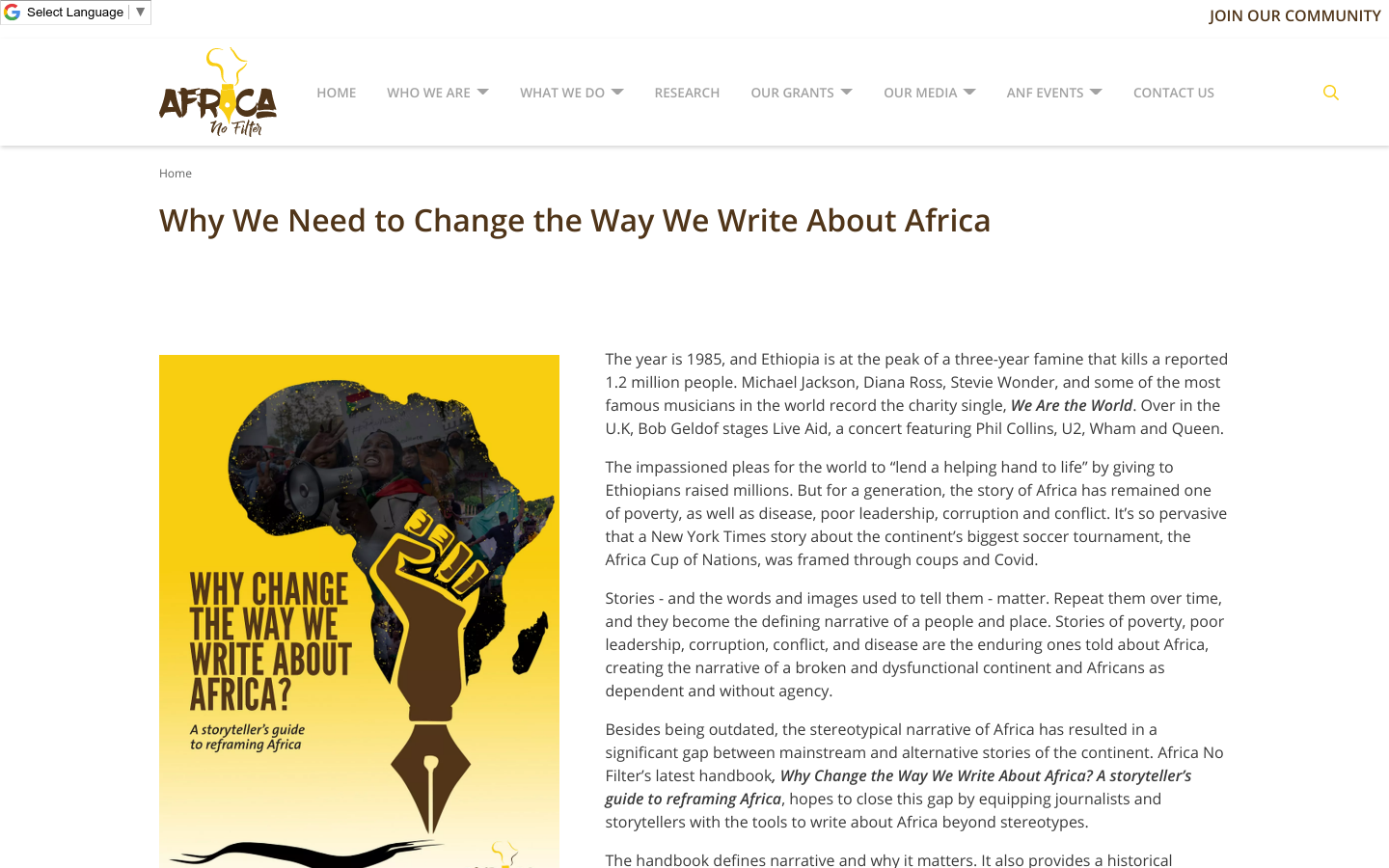 Why We Need to Change the Way We Write About Africa

A storyteller’s guide to reframing Africa

The year is 1985, and Ethiopia is at the peak of a three-year famine that kills a reported 1.2 million people. Michael Jackson, Diana Ross, Stevie Wonder, and some of the most famous musicians in the world record the charity single, We Are the World. Over in the U.K, Bob Geldof stages Live Aid, a concert featuring Phil Collins, U2, Wham and Queen.

The impassioned pleas for the world to “lend a helping hand to life” by giving to Ethiopians raised millions. But for a generation, the story of Africa has remained one of poverty, as well as disease, poor leadership, corruption and conflict. It’s so pervasive that a New York Times story about the continent’s biggest soccer tournament, the Africa Cup of Nations, was framed through coups and Covid.

Stories - and the words and images used to tell them - matter. Repeat them over time, and they become the defining narrative of a people and place. Stories of poverty, poor leadership, corruption, conflict, and disease are the enduring ones told about Africa, creating the narrative of a broken and dysfunctional continent and Africans as dependent and without agency.

Besides being outdated, the stereotypical narrative of Africa has resulted in a significant gap between mainstream and alternative stories of the continent. Africa No Filter’s latest handbook, Why Change the Way We Write About Africa? A storyteller’s guide to reframing Africa, hopes to close this gap by equipping journalists and storytellers with the tools to write about Africa beyond stereotypes.

The handbook defines narrative and why it matters. It also provides a historical context to stereotypical narratives of Africa, from political events like the Berlin Conference, the Mau Mau uprisings and the Rwandan genocide to literature, music and film.

It also includes a checklist of practical suggestions like hiring Africans to tell the continent’s stories, including more Africans on global storytelling platforms and forums, consciously avoiding stereotypes in the words and images used to tell a story, and applying ethical storytelling principles.

Ultimately, Why Change the Way We Write About Africa? A storyteller’s guide to reframing Africa hopes to empower storytellers and media outlets to tell more nuanced and contemporary stories that reflect a dynamic continent and to tell African stories beyond stereotypes.